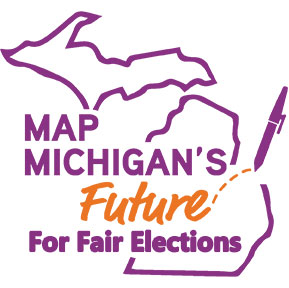 The League of Women Voters supported an Independent Redistricting Commission. We were pleased that Proposal 2, a constitutional amendment, was passed in the November 2018 election by Michigan voters. Proposal 2 established an impartial Commission of voters (not politicians) who were charged with creating new district maps for state and congressional offices. The maps would by drawn after the 2020 census and could not favor one party or candidate. The Commission would operate in a completely transparent manner and would create maps based on fair criteria. As required by the Michigan Constitution, the Redistricting Commission is made up of 13 citizens: 4 Democrats, 4 Republicans, and 5 members unaffiliated with either the Democratic or Republican Party. In order to be approved, each map must be approved by a majority vote of the 13 members of the Commission and must include at least two Democrats, two Republicans, and two Commissioners independent of either party.

More information about the Michigan Independent Redistricting Commission (MICRC)’s process, including meeting schedules, links to past meetings, commission information and timeline can be found here.

On December 28, 2021, the Michigan Independent Redistricting Commission approved district maps for Michigan’s U.S. Congress, State House, and State Senate districts. The maps were based on 2020 Census data and were drawn by the Commission under the guidance of the seven ranked criteria listed in the Michigan Constitution. For details of the maps and the ranking criteria, please go to Michigan.gov/micrc. The approved maps will replace the current maps which were approved by the Michigan Legislature in 2011.

2022 membership meetings will be conducted virtually and are generally held on the 4th Thursday of the month at 7 p.m.  To attend an upcoming meeting please e-mail us at lwvmacomb@gmail.com for an invitation link.